Quantum computers are knocking on our door 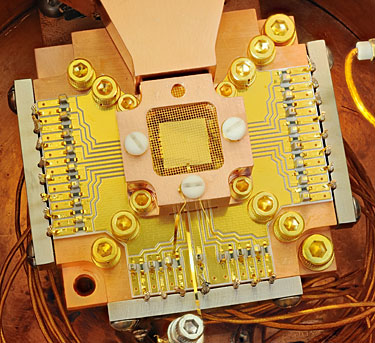 “I’m not saying that we are going to invent a completely new way of thinking and managing information. No,” — says Alessandro Curioni, Vice President of IBM, as he presented a new 53-qubit quantum computer in a room packed full of journalists.

He should know. Curioni is the director of the IBM research lab in Zurich, Switzerland, and recently announced what is believed to be the world’s strongest quantum computer, and one of the strongest overall computers in the world.

“The importance of quantum computing is it simply that it is able to take some of the very difficult problems that we have in computing — problems that have a computation complexity that is factorial,” he adds.

The qubit, as we shall see, is much more potent than the bit. It opens up tremendous opportunities not only

Quantum computers make use of quantum phenomena such as entanglement and superposition to perform computation. Unlike “traditional” computers, which use bits that can be either 0 or 1, qubits (quantum bits) can take on a number of superpositions.

Think of a qubit as a sort of Schrödinger’s cat. In the famous thought experiment, the cat was placed into the box and left there with a poison flask triggered by any radioactive decay. A radioactive atom with exactly 50-50% chances of triggering was installed. This means that until the cat is observed, it is both alive and dead, with both probabilities having 50% — it takes the quantum superposition of the radioactive atom. But when the cat is observed it is either alive or dead. Similarly, a classical bit is either a 0 or a 1 — you assign it to one state, and that’s that. A qubit meanwhile, is a coherent superposition of both 0 and 1, based on a probability distribution.

Let’s take an example. If you have 64 classic bits, they can be either 0 or 1, so you have 264 possible combinations. It would take a 64-bit computer centuries to cycle through all these possible values.

But since qubits can hold a zero, a one, and any proportion of both zero and one, an array of qubits can use this superposition to represent all the 264 possible combinations at once (probabilistically), and extracting the desired configuration might be done much quicker.

Due to the way qubits work, quantum computers are well-suited to working on some types of algorithms, especially research algorithms. Simulating quantum phenomena, chemical interactions, or protein folding is one potential application. Cracking codes (or protecting them, as we shall see later) is another area of interest. So quantum computers might not become PCs

Are we there yet?

Of course, having a theoretical understanding of a quantum computer and actually building one are two different things.

Any two-level quantum system (photon, electron, nucleus, etc) can be used as a qubit. But in practice, this has proven extremely challenging. Qubits also need a universal gate set, and this gate set needs to be faster than the quantum decoherence time — otherwise, the information would be lost.

Building qubits that are scalable, easily read, and stable has seemed a nigh-impossible task for decades. However, in recent years, several research groups have claimed significant progress, including private companies like IBM and Google.

Last year, both mammoth companies laid claim to the world’s strongest quantum computer. IBM unveils its first commercial quantum computer, the 20-qubit IBM Q System One, which can be used by researchers in the cloud. Mere months later, IBM released another, bigger quantum computer, consisting of 53 qubits. Around the same time, Google published a paper claiming quantum supremacy with its own, 54-qubit quantum computer.

Although there was a little back-and-forth with the two companies trading jabs, this is still remarkable progress which suggests that working, scalable quantum computers might be right around the corner.

However, it will be a long time before you can play Fortnite on a quantum computer. Nana Liu, a quantum physicist at the John Hopcroft Center for Computer Science, believes that certain algorithms can be sped up on quantum devices — but that’s pretty much all we can hope for in the near future.

“The theoretical development of quantum algorithms is still in the exploratory stages and on the experimental side it’s at the very beginning,” Nana says. “But there are some promising results of demonstrating quantum supremacy in Google’s latest experiment in October 2019.”

In the near term, applications will be very limited, Nana tells me. Most would focus on quantum chemistry or quantum simulations. But as quantum computers become more robust, they could also accelerate search algorithms and machine learning.

Her view is shared by most researchers in the field. Although applications will be fairly niched, it’s exciting that already, we already seeing glimpses of what quantum computers can do.

“Recently, quantum computing has been focused on finding and solving near-term problems that are difficult or impossible to solve for a classical supercomputer,” says Corey Rae McRae, a postdoc in quantum computing at NIST Boulder. “Now that Google has been able to demonstrate the impressive ability of even a small-scale quantum computer, the field is looking to improve the scalability and performance of qubits by implementing lower loss and higher quality materials.”

Think of it this way: in theory, at least, classical physical systems can be cloned entirely. But if you try to copy a quantum-encrypted message, you observe the quantum system which creates a modification. This will create an easily detectable disruption.

This type of technology is already being applied. Nana mentions the Chinese Micius satellite, a Chinese research project in the field of quantum physics. that set up the first international quantum cryptography service.

Quantum computing opens up truly exciting new avenues, potentially making for a true revolution in computing. It might be a while before we get there — but once we do, the rewards will be worth it.