As EURO 2021 kicks off, Big Data and AI are making an impact in global football 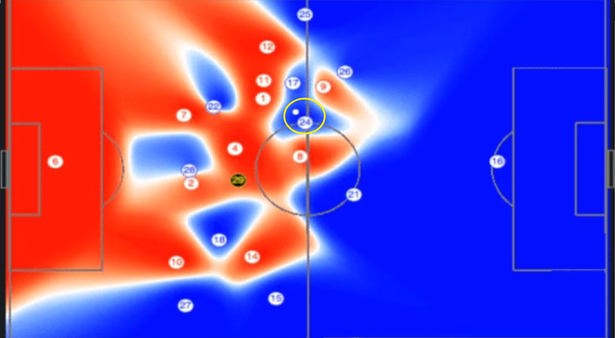 In 2019, Liverpool FC dominated the Champions League, the most prestigious cup in club football. Almost everything seemed to go their way: a clever and capable coach, a talented and driven team, and a few tricks that kicked in at just the right time. At first glance, it seemed that luck was shining on the team — but this was not luck. Liverpool was leveraging the power of big data and artificial intelligence.

A look through Liverpool’s research team shows you they take data very seriously. The director of the club’s research division, Ian Graham, holds a PhD in theoretical physics, and he focuses on finding trends that might escape the naked eye. By gathering large sets of data and crunching the numbers, he can find sophisticated patterns that can help the team prepare against opponents or find a winning strategy.

“What we’ve built is a platform where the analysts can either look at the opposition analysis or post-match analysis from our point of view, so we’ve got expected goals models and expected possession value models that are linked to video to say: ‘This is what we thought was a dangerous situation.’”

Graham is not alone in this quest. Tim Waskett, an astrophysicist, and Will Spearman, who has a doctorate in philosophy, are two of his colleagues. Both have spoken about pitch control — which team controls what part of the pitch. They think of passing and scoring in terms of geometry and odds: What areas are the most likely to be controlled by our team, instead of theirs? What type of pass is most likely to lead to a goal? They generate plots such as the one below to help the player know where to pass. In the image, blue spots are controlled by “us”, while red plots belong to “them”.

Strategizing against other teams is just one of the ways AI and big data are used in football. In a recently published paper, Liverpool FC teamed up with researchers from DeepMind (the AI company behind the likes of AlphaZero and AlphaChess) to test how “AI-enabled system can assist humans in making complex, real-time decisions in a multiagent environment with dozens of dynamic, interacting individuals.”

The motivation is easy to understand: we’ve never had access to this much information about players and teams — you can track players’ movements, where shots go, individual behavior, and many more. You can use the big data directly, or feed it into models, and there are ways to use this at every single level of the game: from individual training to finding tactical ideas in tough situations.

The paper and an accompanying blog post from DeepMind highlight three areas where AI and big data can make a difference: computer vision, statistical learning, and game theory.

“While these fields are individually useful for football analytics, their benefits become especially tangible when combined: players need to take sequential decision-making in the presence of other players (cooperative and adversarial) and as such game theory, a theory of interactive decision making, becomes highly relevant. Moreover, tactical solutions to particular in-game situations can be learnt based on in-game and specific player representations, which makes statistical learning a highly relevant area. Finally, players can be tracked and game scenarios can be recognised automatically from widely-available image and video inputs,” the DeepMind team explains.

For instance, player behaviors on the pitch (both from “our” team and “theirs”) could be gathered from video recordings, which are already widely available. Game scenarios such as attacks, set pieces, or even entire games, could then be simulated and recognized automatically, with the algorithms spotting patterns that the players themselves may not be aware of. These models could also predict the implications of a tactical change or a substitution, estimating the opposition’s response to the change.

Managers could also use predictive models to simulate games between their team and others and try out various starting lineups or strategies, seeing the scenarios where the model estimates you’d fare best. Of course, this is bound to be an imperfect simulation, but it may offer important insights nonetheless. After all, the goal of AI isn’t to replace coaches or managers, but rather to help squads optimize their training and game preparation.

Who benefits the most from this?

Football has changed a lot in recent years, and much of that change has based on analytics. Big data is supercharging that trend, and the application of AI techniques has the potential to revolutionize the game on many axes (not just for players and coaches, but also for drafters and broadcaster). A part of this still feels ethereal — almost close enough to touch, but not fully tangible yet.

But we’re already starting to see some impacts. Liverpool FC is a pioneer, but not an exception. More and more teams are investing serious resources into this type of project, because the potential benefits (even from imperfect models) are so great. Football is, of course, a multi-billion dollar industry, and every bit of useful information can make a big difference.

This all begs the question: will all these techniques help football become democratic, by democratizing the sport (for instance, rather than relying on big teams of scouting experts, team can use computer techniques to analyze players), or will only the rich teams be able to afford this, and will they grow even more as a result? The jury is still out, and the change won’t happen overnight.

There are still major research challenges. DeepMind mentions that predictive football models “require new developments and progress”, and football is (and will remain) an unpredictable sport. A 2021 study found that almost half (46%) of goals have some form of random influence in them. AI can help offer a competitive long-term edge, but it’s unlikely to be able to incorporate the complexity and randomness coming. For now, at least, football is still very safe from being predictable.

The post As EURO 2021 kicks off, Big Data and AI are making an impact in global football originally appeared on the HLFF SciLogs blog.